I absolutely did not intend to go so long without writing here, but I have recently learned I cannot think about more than one thing at a time, and my attention had been drawn elsewhere.  I thought I didn’t have much to write about, but apparently I do!

First of all, I’ve been paying a lot of attention to this book: ADD-Friendly Ways to Organize Your Life by Judith Kolberg and Kathleen Nadaeu, Ph.D.  It is amazing, and it pretty much explains why I struggle with everything from time management to clutter management.  I’ve been slowly trying to implement the techniques of this book, and I’ve noticed that after only a week, things have been going a bit more smoothly around the house.  I’m going through the book a second time now and trying to focus more on certain elements.  I love it, love it, love it!  I can’t recommend it strongly enough if this is an area where you have struggled.

Another reason I haven’t written much is because I feel like I haven’t had anything positive to report about the kids.  William’s been cranky, Gabriel stubborn, and Michael’s regressed yet again.  Michael has been a particularly tough cookie the last two weeks.  There’s definitely something wrong or misaligned because the compulsiveness is back with a vengeance, he’s hitting, kicking, knocking things over, and smearing poop everywhere (when is THAT awful plague going to finally go away???).  I’m holding my breath till our doctor’s appointment in nine days.  So I’ve just kept my head down and tried to manage the boys, keeping them outside as often and as long as possible where their crazy doesn’t bother me as much.

I know this is a problem I have.  When all their baggage starts building up around me (and trust me, they generate a lot of it!), it becomes all I can focus on, and I forget how far we’ve come.  Well, God gave me this little gift the other day. 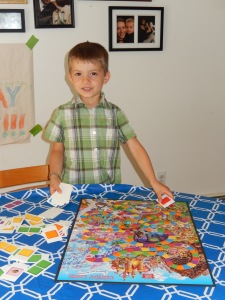 Michael and I actually played one entire game of Candy Land together!!!!!  This may not seem like much of an accomplishment considering he’s closing in on six years old, but I got this game for him years ago, and not only could he not understand it, he didn’t get you were supposed to play it with other people.  He would just obsessively move pieces up and down the board, not even comprehending the direction of the path.  Anyway, he did awesome!  He took turns, he finally got what each card indicated, and seemed generally happy to actually share the experience with me instead of just doing it by himself.  It helped that the game only lasted about three minutes because he got one of those specialty cards that resulted in him skipping about 80% of the board in one turn and him winning the game.  He tried to play again and his brain just couldn’t maintain the structure that long, and he dropped off and started running the little guys up and down the board by himself again, but it was really neat to see a successful run.  It’s been so long, and we have NEVER EVER been able to play a game together before.

So we’re going to end on that happy note.  Hope you all have a lovely weekend!