Croup’s awful.  I never had to deal with it before.  All three kids have moved or are moving through their own forms of it.  William and I spent the night alternating between the living room sofa and a steamy bathroom.  It’s amazing how babies suddenly and magically feel fine when morning comes around.  He’s still sick, but at least he’s happy now.  Gabriel’s the one who woke up feeling miserable. 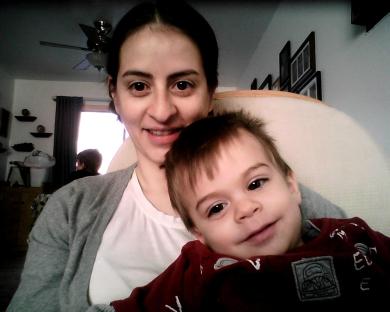 Though who doesn’t feel cheered up by seeing themselves in a webcam?

I’m grateful at how God is changing my perspective.  The old me would want to whine and complain (and I still have my moments, my  neck’s not a fan of carrying a child for two solid weeks and then sleeping on the couch), but as I’m starting to go down that road, the Lord reminds me that I’m right where He wants me.  I have absolutely no doubt of that.  So even if this particular stint’s a bit rough, why would I want to be anywhere else?  God is good, and He’s up to something.  I feel a little character shaping going on.